Posted on July 21, 2018 by Thiruvananthapuram

Karyavattom and Kazhakkoottam were once the outskirts of Thiruvananthapuram city. Eventually, these sleepy villages became a ‘Technopolis‘. The Kerala University campus is 50 years old and Technopark is 25. Technocity and The Sportshub stadium are recent additions. High rise flats have mushroomed. The roads have widened and are still being widened. The population is truly metropolitan. Like all new cities that appear like a flash mob, most of its new inhabitants are unaware of the local history while they themselves shape the future of the place and presently, its history too. Is Karyavattom a place where people (or some argue, the scheming landlords, Ettuveettil Pillamar) sat in a circle (vattam) to chat (kaaryam parayan)? Totally unlikely. Vattom is seen in the names of many places in Kerala such as Kuthiravattom and Aanathalavattom and is merely a generic reference to a place. The name ‘Karyavattom’ arguably originates from the word ‘Kaaryakkar’, a reference to temple employees. Personnel associated with Kazhakkoottam Mahadeva Temple/Thrippadapuram Temple near the Kerala University campus may have created settlements near the temple.

The ‘karyam’ in Karyavattom is seen embedded in other nearby places such as Sreekaryam (Sreekaaryakkaran refers to the superintendent of a temple, according to Herman Gundert). Old timers refer to Sreekaryam as ‘Cheeyaram’. There is also a place Kariyam, near Sreekaryam, but the ‘Kari’ in it may also refer to farmlands as in Raamankari in Kuttanad. To comprehensively prove that Karyavattom does not originate from the story of the Ettuveettil Pilla family, one needs to locate references to the place name prior to 1700s.

What about Kazhakkoottam? ‘Kazhakkoottam’ may have originated from ‘Kazhaka Koottam’, kazhakam being a reference to the temple authorities (a temple chiefly considered in its political bearing, according to Gundert). Kazhakkoottam Temple is ancient and lends credibility to the above arguments. 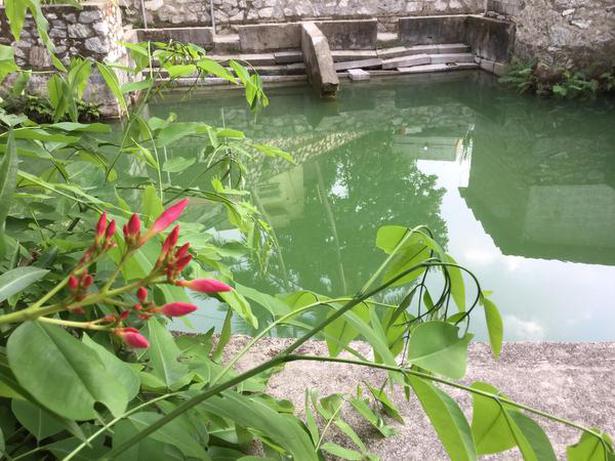 There are other theories for the name of the place. ‘Kazha’ could be timber used for construction or ship building. In Mathilakam Records of 1770 AD, the place is mentioned as ‘Kazhai Koottam’. Dense plantation (koottam) of kazha could have been there in the place. One of the traditional houses in the area, near Arasinmoodu, bears the name Kootta thengu. Yet another explanation is that there could have been a Kazhaki temple (village goddess) during the Sangam period. V.V.K Valath opines that ‘Kazhaki Koottam’, gathering in front of ‘Kazhaki’, could have become Kazhakkoottam. There is an Amman shrine near the Kazhakuttom Shiva temple to lend credibility to this argument. Naduvattam Gopala Krishnan mentions that Shuka Sandesham, a work of the 13th century, refers to travel from Thiruvananthapuram to Kollam through a place full of Kazhukan (eagles). He opines it could be ‘Kazhuka Koottam’ that became Kazhakkoottam. But the travel from Thiruvananthapuram to Kollam could also have been through the sea-side instead of the national highway we see now. Unnineeli Sandeham describes travelling from Thiruvananthapuram towards North and refers to the route Palkulangara-Thirippapoor-Muthala Pozhi-Varkala.

There is then the belief that the temple was consecrated by Kalakkode Maharshi, who lived near Kumizh Theertham, a pond, a few kilometres away from the eastern part of the temple, which is extant even today, and the place was named after him as Kalakkode. That Kalakkode could transform to Kazhakkoottam is not tenable. Among all the explanations, one tracing Kazhakkoottam to ‘Kazhakam’ of Mahadeva temple seems the most tenable.

Ward and Conner (1818) refer to Kazhakkoottam temple along with the major temples in Thiruvananthapuram. They wrote: “The most ancient building is the pagoda on Terumalla Covil hill. Besides the above, there are Hindoo temples, at the following places viz. Trivandrum, Ooloor, Colatoor, Cullicootum and Cuddanumcolum.”

They describe the place thus: “Cullicoottum is a populous village on the high road 7.5 miles N.W. by .5 W of Trivandrum; a pagoda stands on the North of the road, the roof covered with plates of brass, having a gilded minaret on the top. An agarum lies to the South of it dedicated to the Goddess Mahadavee, where a festival is annually celebrated and attended by the Rajah, who has a palace on the bank of the reservoir East of it.”